When it comes to penny auctions, Quibids is the quintessential household name. Quibids’ large television advertising budget has helped it to become the most well-know and trafficked penny auction website in the USA, Canada and other major countries around the World. Other penny auction sites which compare in size include DealDash. If you’ve bid recently on Quibids, please help us by leaving your Quibids review at the bottom of this page.

Disclaimer: This review was written by an independent third party. For any comments or factual corrections, please email info@bestpennyauctionsites.org.

Quibids.com seems to offer more penny auctions than any other penny auction site (it’s hard to tell since many penny auctions seem to exaggerate the number of daily auctions offered). As a result, the product variety is incredible, as-is the frequency of auctions. Let’s just say that you will never find it hard to find something that you want to bid on.

That being said, Quibids ranks on the high side of the scale when it comes to competition. Their large advertising budgets draws lots of new members daily so bidding can be nuts at times. Fortunately, they offset the high competition by offering so many auctions. 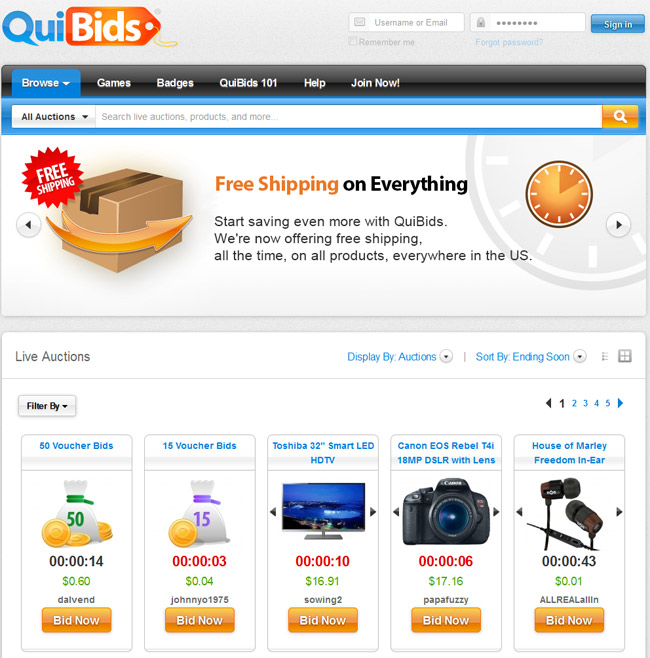 Is Quibids a scam?

We think that Quibids practices transparent business practices and can be considered an industry leader as far as penny auctions go. We have no reason to believe that Quibids is a scam.

Update (6/17/2015): According to BBB, Quibids was asked to disclose statistical information concerning its auctions and the winners of those auctions. According to the company, it hosts about 9,000 auctions per day; of those auctions, about 4,000 are won by different individual bidders. An average of 2,000 bidders per day win multiple auctions.

Try Quibids and Get 3 Free Bids

What is Quibids’ buy now feature all about?

Quibids is a penny auction site which offers Buy Now, a feature which allows penny auction losers to apply the value of the bids they lost to the purchase price of an auctions. Here’s how it works- Let’s say you use 300 bids (worth $180) while bidding on an iPad. Even worse, let’s say that you lose!

Quibids allows you to then apply a $180 credit toward buying the iPad, if you choose to do so. This basically makes it less-risky to bid on an auction if you are prepared to purchase the item at retail anyways. Learn more about Quibds.

Yes, according to their help documentation and our bidding experiences, Quibids only auctions brand new, factory-sealed auction items.

How much do Quibids bids cost?

Quibids bids are $0.60 each, almost always. Quibids is the only penny auction website that we know of which sticks very firmly to their bid prices. We rarely see any sort of discount on Quibids bids. In fact, the only way to really save on bids is to win them in auction or to get free bids when signing up.

Yes, Bid-O-Matic is the name of Quibids auto bidding software. Bid-O-Matic is started when a user sets a ‘bid from price’ (the price at which it will turn on) and the number of bids to be placed.

How does Quibids’ Buy It feature work?

Quibids offers Buy It penny auctions where auction losers can apply the value of lost bids on any auctions towards purchasing the product for retail value.

Every new bidder should consider these tips when bidding on Quibids auctions:

There is only one penny auction which rivals Quibids in terms of bidding competition and that’s DealDash. DealDash and Quibids are currently the largest (by far) in terms of active auctions and active users.

Sites with Similar Products as Quibids

HappyBidDay, OrangeBidz, and DealDash all offer a simliar variety of product auctions as does Quibids. While HappyBidDay has many fewer auctions (and users!), they do offer a ‘choose one’ feature which let’s you pick from a variety of similarly-priced products when you win an auction.

Overall, we feel that DealDash is most similar to Quibids due to the size of the site.

How Does the Quibids Store Work? 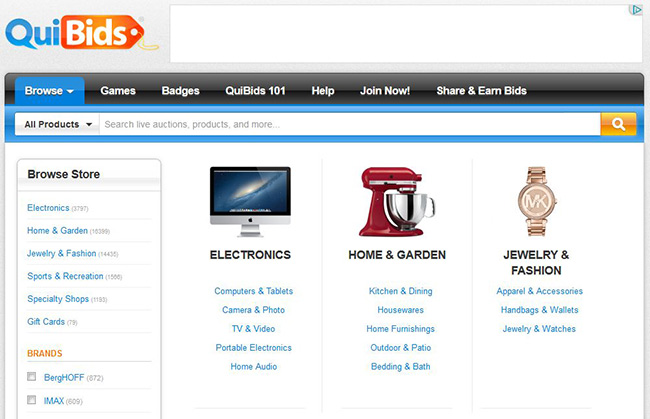 The Quibids store is Quibids’ attempt to become a typical “ecommerce” website. The Quibids store works just like any other online ecommerce website with just one exception- When you purchase something from the Quibids store, you get ‘Voucher bids’ which can be used in Quibids penny auctions.

In our review of the Quibids store, we noticed that the pricing on most items is about the same or slightly higher than other online retailers. We think that the Quibids store is a good fit in case where you want to purchase an item and Quibids pricing is competitive. That way, you can cash in on some free bids for Quibids penny auctions.

The reviews below were submitted by users, and solely reflect the views of the individuals who submitted them. Users were not compensated for leaving a review.

Create your own review
Quibids
Average rating:   8 reviews
fatima kayani
by fatima kayani
I am so Glad to find golaunche

Good quality, I've been using it for 2 years.

golaunche - customer care quality service, I've been using it for 2 years. My WordPress, Mybb forum, PHPbb is all hosted here.

Quibids looked like it could be a lot of fun and the deals are definitely there.I should have researched more thoroughly though. It wasn't until I had signed up that I discovered my trusted friends at PayPal were not invited. I've trusted PayPal for about ten years with all my online $$$ but I can't use them here. I Gotta Bow Out!

Quibids was the first penny auction that I ever bid on years ago. At this point, it's become very difficult to 'profit' from bidding. It's not my favorite penny auction but it's not the worst either.

peter
by peter
Free is not free

Quibids is not in business to lose money. the only ones here that lose money are the consumer. Ignore low price show for winning bids on apple stuff and almost all prices are locked at a low price but bids are not and your only cost is your bids. Now multiply .60 (bid cost) times 3000 bids and you now see why they don't lose money. this also goes to "free to bid" as it still cost you on each bid. Items not locked or free are truly better but be careful as you need to figure you bid cost and final winning price.

One of my favorite penny auctions. Lot's a variety, buy it is very forgiving. However, it's really hard to develop a good strategy with the level of compeition.

I saw the quibids commercial on tv and thought it looked pretty cool. I blew about 60 bucks and stopped there. Guess i shud have done some homework first.

Quibids has pretty fair auctions and good product selection. The buy it and free shipping features make it one of my favs. Like any other PAs, there are power bidders but not too bad.